Share with your network!
January 13, 2016 Cloudmark Marketing
In 13 years of protecting hundreds of millions of end users from email and mobile spam, Cloudmark has seen billions of malicious emails, giving the company an inside view of the threats that come from messaging environments. We’ve seen the rise of phishing emails and their effects. And more recently, in the past several years, we’ve observed the tremendous growth and success of spear phishing attacks which have had devastating consequences for businesses and governments. Spear phishing has been associated with most of the largest cyberattacks in recent history including the widely publicized attacks on JPMorgan Chase & Co., eBay, Target, Anthem, Sony and various departments within the U.S. government. Those are the basics, but we wanted to know more: How do businesses themselves perceive the threat from spear phishing? What kinds of impacts do spear phishing threats have on enterprises? And how are enterprises doing in the fight to combat spear phishing attacks? To gain insights, we commissioned a study, conducted by the independent research firm Vanson Bourne, to ask 300 IT decision makers about the threat spear phishing represents from the enterprises’ perspective. Two hundred companies were based in the U.S.; the other 100 companies were from the U.K. The respondents were all IT professionals. 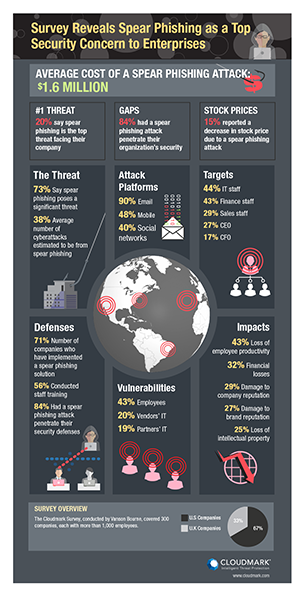