March 02, 2017 Andrew Conway
A few weeks ago we reported on the changing strategies used by diet pill spammers. There's been a breakthrough in the world of fraudulent pill spam, and the same operation is now pushing pills that will magically make you smarter instead of skinnier. 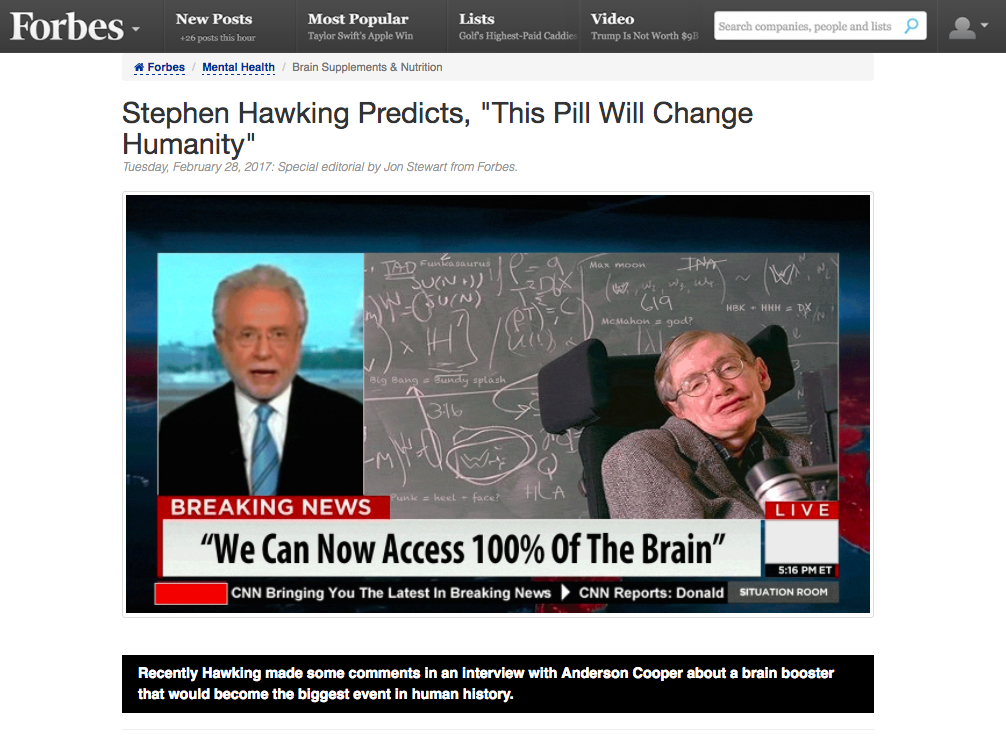 Instead of a fake version of the gossip website TMZ, the latest landing page appears to be the Forbes website, and the celebrity endorsement has changed from Gwen Stefani to Professor Stephen Hawking. Amusingly, the page mentions Hawking being interviewed by CNN reporter Anderson Cooper but shows a picture of Wolf Blitzer, a different CNN reporter. The article is credited to Jon Stewart who is not actually a reporter, but a comedian and former host of The Daily Show on Comedy Central. As Professor Hawking communicates using a speech synthesizer operated by eye movements, he can no longer give real time interviews. Anyone familiar with the real Forbes website will at once recognize this one is fake without even looking at the URL, as it does not make you spend five seconds reading Forbes' "Thought of the Day" and watching an interstitial ad. Scrolling down from the image above takes you to a number of ludicrous claims:

OK, which is it, a doubling of IQ or a 77% increase in IQ? And how do you actually measure concentration? Any link you click on in this page, including the Forbes navigation links at the bottom, will take you to a purchase page. As we mentioned in a previous article, diet pill spammers are now using HTTPS websites for their sales pages to give the impression of greater respectability. However, that makes the sales pages more expensive to set up, so this one doubles up. offering magic brain food at one URL and miracle diet pills at another. The sales page does link to four medical papers in an attempt to justify the medical properties of the bogus trash they are selling. Three of these deal with drugs used in treating cognitive disorders such as ADHD and Alzheimer's disease, and the fourth is a survey of plants used in traditional Indian medicine to identify those that may have useful pharmaceutical properties. One of the articles does indeed mention using a cognitive disorder drug on the general population:

While highly effective in their intended therapeutic role, performance gains in healthy populations are modest at best and profoundly inconsistent across subgroups and individuals.

The bottom line is that if you believe there is a pill that will make you smarter, you probably need one. Unfortunately it won't work.