January 22, 2019 Andrew Conway
Payday loan promotions are one of the most common forms of SMS spam. Payday loans are regulated on a state-by-state basis, but it appears that the volume of SMS spam targeting each state depends not just on the regulations, but on the extent to which those regulations are enforced. Payday loans are short-term loans offered at extremely high interest rates to borrowers who would not otherwise have access to credit. They are typically due on the borrowers’ next payday. Payday lending companies claim that they provide necessary liquidity to people who could not get it elsewhere. However, critics see a number of issues with the industry. According to the New York State Department of Financial Services:

Borrowers often must obtain new payday loans to repay previous ones because of the high interest rates and fees, creating a cycle of extremely high debt with onerous payment terms… many consumers who take out loans online report receiving threats from online lenders, including lenders contacting borrowers’ families, friends, and employers… It also has been reported that payday lenders and their affiliates have defrauded consumers and mishandled their personal information… https://www.dfs.ny.gov/reportpub/online_lending_survey_rpt_07112018.pdf [PDF]

Regulation of payday loans varies from state to state. Some states attempt to ban them entirely, some heavily regulate them, and others allow them. However, lenders operating over the Internet may attempt to circumvent these regulations by claiming affiliation with a national bank or a Native American tribe that is not subject to state regulations. To determine how effective these regulations are and see what other factors might be involved in payday loan targeting, we looked at the geographical distribution of SMS spam promoting payday loans. We took a sample of 72,968 SMS messages from the Cloudmark SRS Spam Reporting Service (SRS) collected over a two-week period in December 2018. These were messages that mobile subscribers reported as spam by forwarding message samples to the spam reporting shortcode "7726”. They were flagged as promoting payday loans based on keyword analysis. Payday loan spammers often avoid using the word ‘loan’, but may say ‘funds’, ‘cash’, ‘wire’, ‘ach transfer’, ‘advance’, ‘approval’, ‘balance’, etc., so some manual curation was required to select the final sample set. We assigned the messages to a state based on the area code of the reporter. We divided the number of messages in the sample assigned to a particular state by the population of that state to get a measure of the spam density for that state, and then divided that by the national average to get a Payday Loan Spam Index (PLSI) for each state. In other words, if a state has a PLSI of 0.5 they are getting 50% of the national average of payday loan spam per person, and if they have a PLSI of 1.5 they are getting 150% of the national average. The higher the PLSI, the more that state is being targeted. PLSIs varied from less than 0.25 (Connecticut, New York, Vermont) to more than 1.8 (North Carolina, South Carolina, Ohio). We divided states into groups where payday loans were legal, highly regulated, and illegal based on the information at https://www.finder.com/payday-loans-in-your-state, and calculated the PLSI for each group. 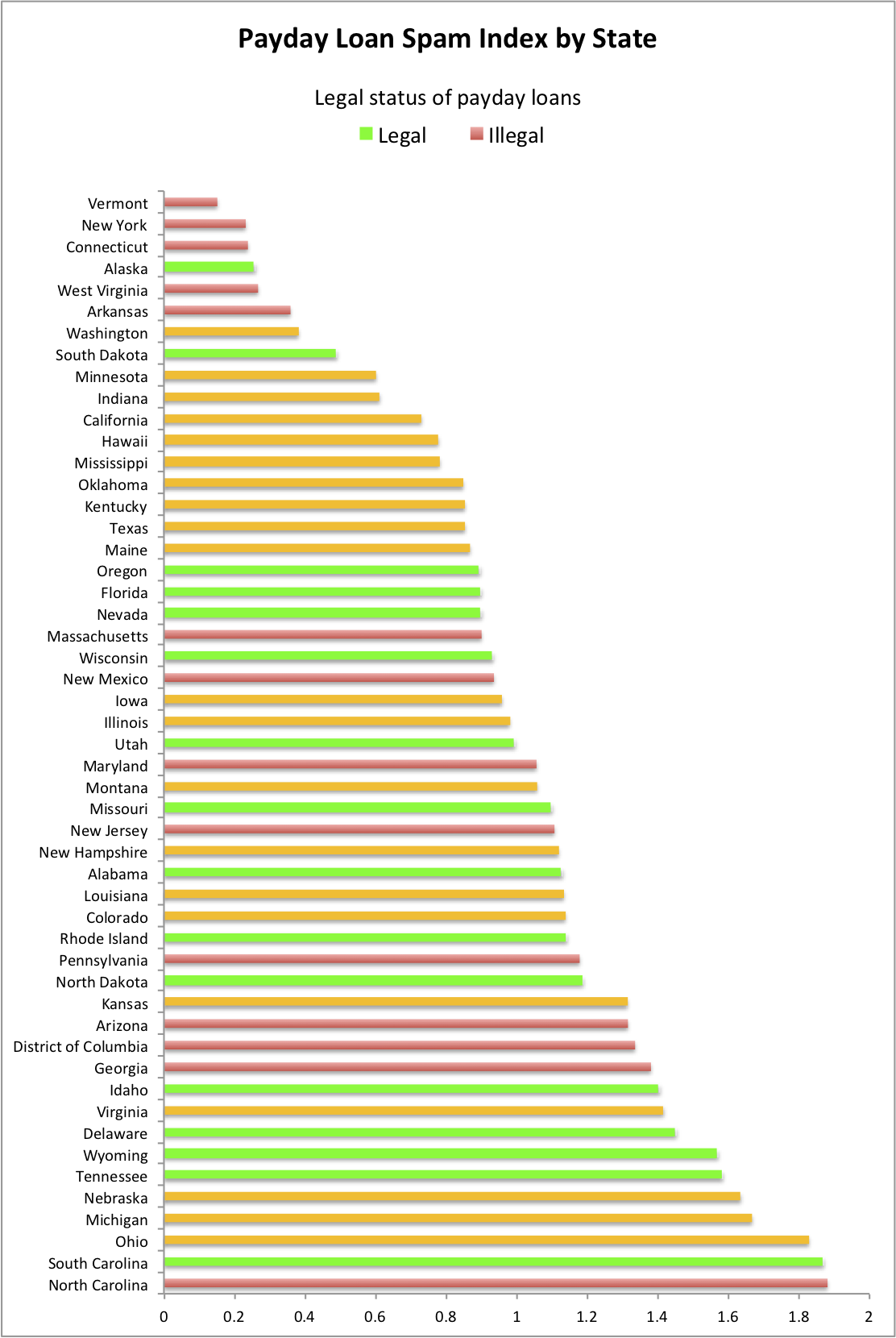 It is also possible to calculate the PLSI for a group of states, by summing the spam count and population for those states. We calculated the PLSI for the three groups of states. While there is a slight correlation between increasing regulation and less spam, there is not much difference between the three categories, and, as visible in the above chart, the state with the highest PLSI is North Carolina, where payday loans are illegal. It seems that in some states, regulations against payday loans are not enforced, and the lenders simply ignore them. We looked at other factors that might be determining levels of payday loan targeting. There is no correlation between the general level of education in a state and the PLSI. 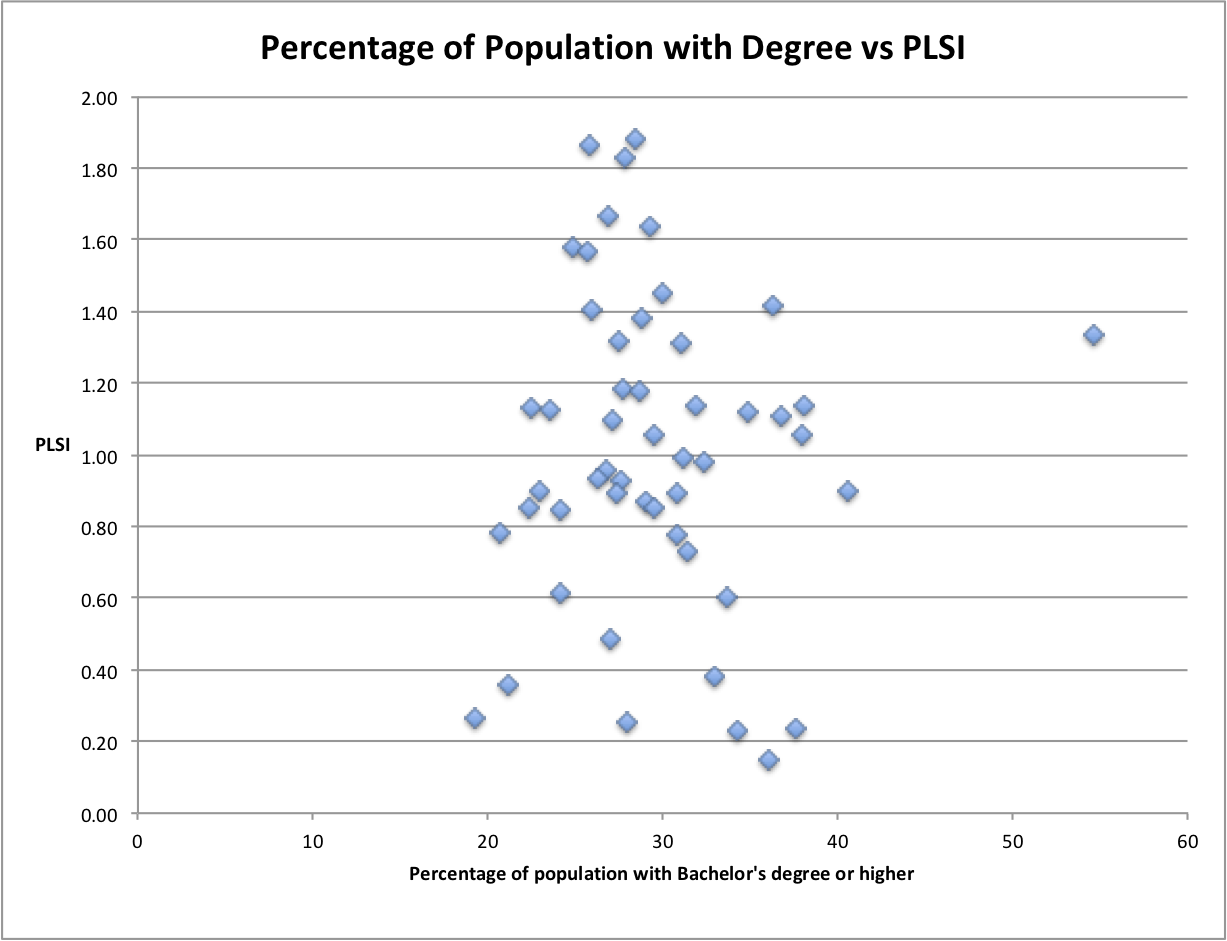 There is no correlation between poverty and the PLSI. 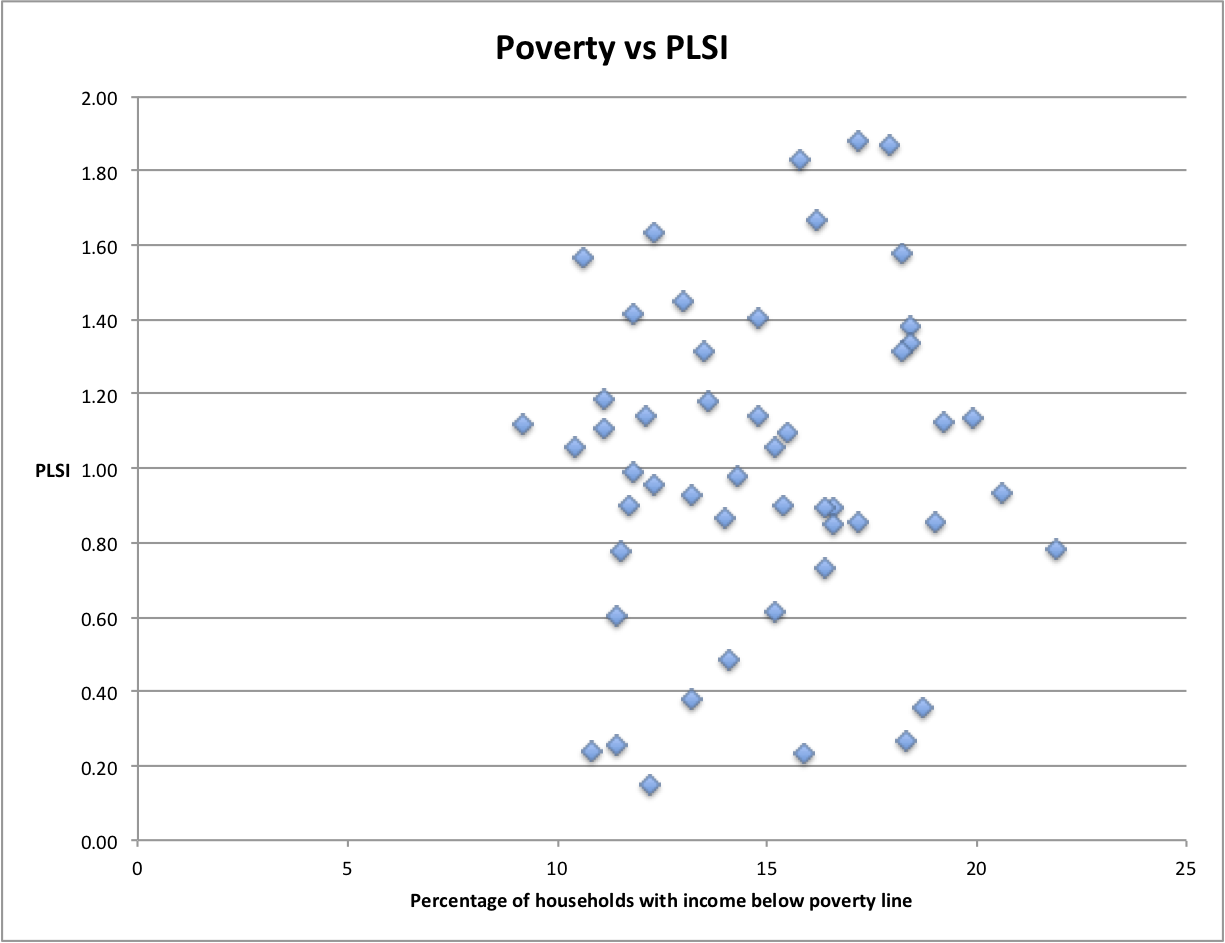 There is no correlation between median age and PLSI. 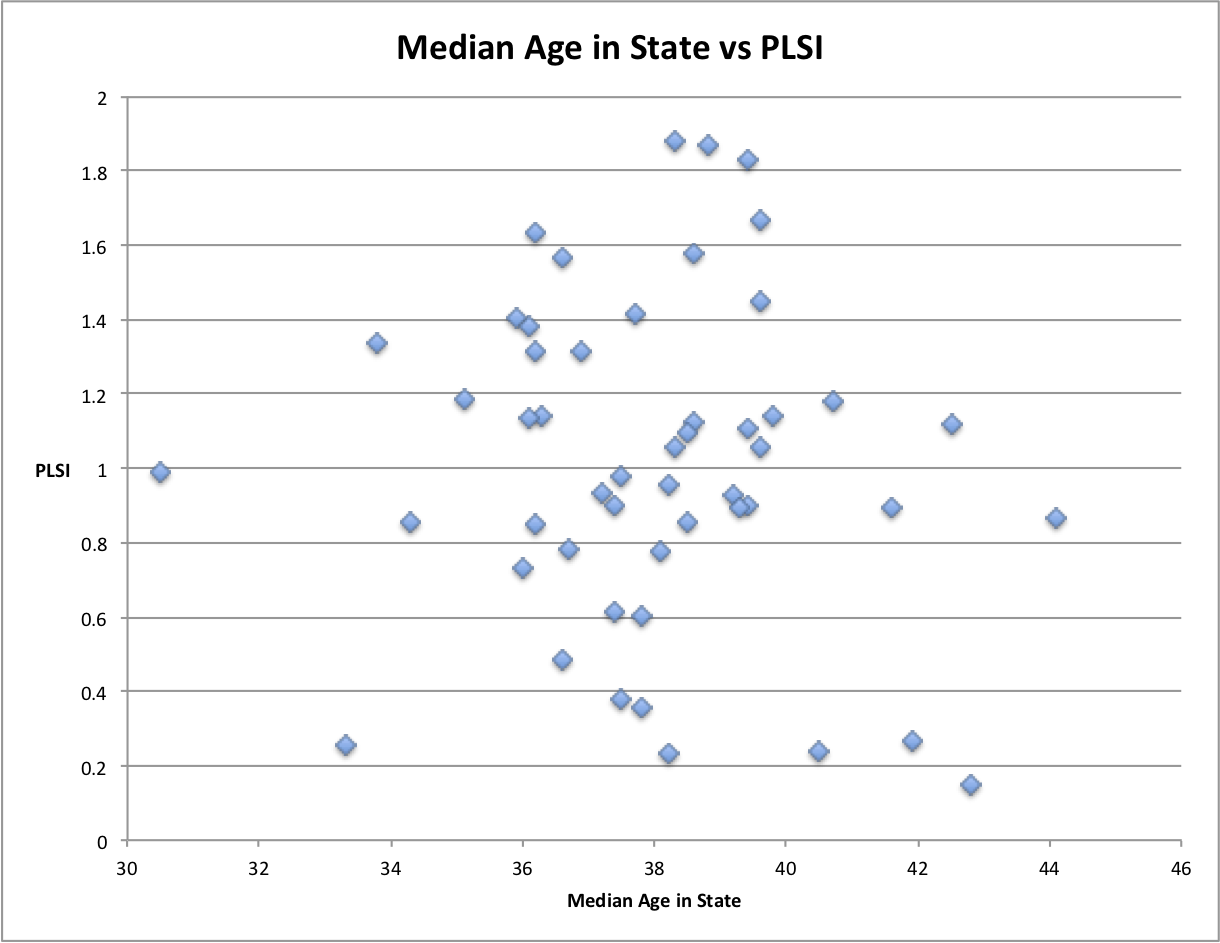 There is some correlation between the percentage African-American population in a state and the PLSI. The correlation coefficient is 0.30. 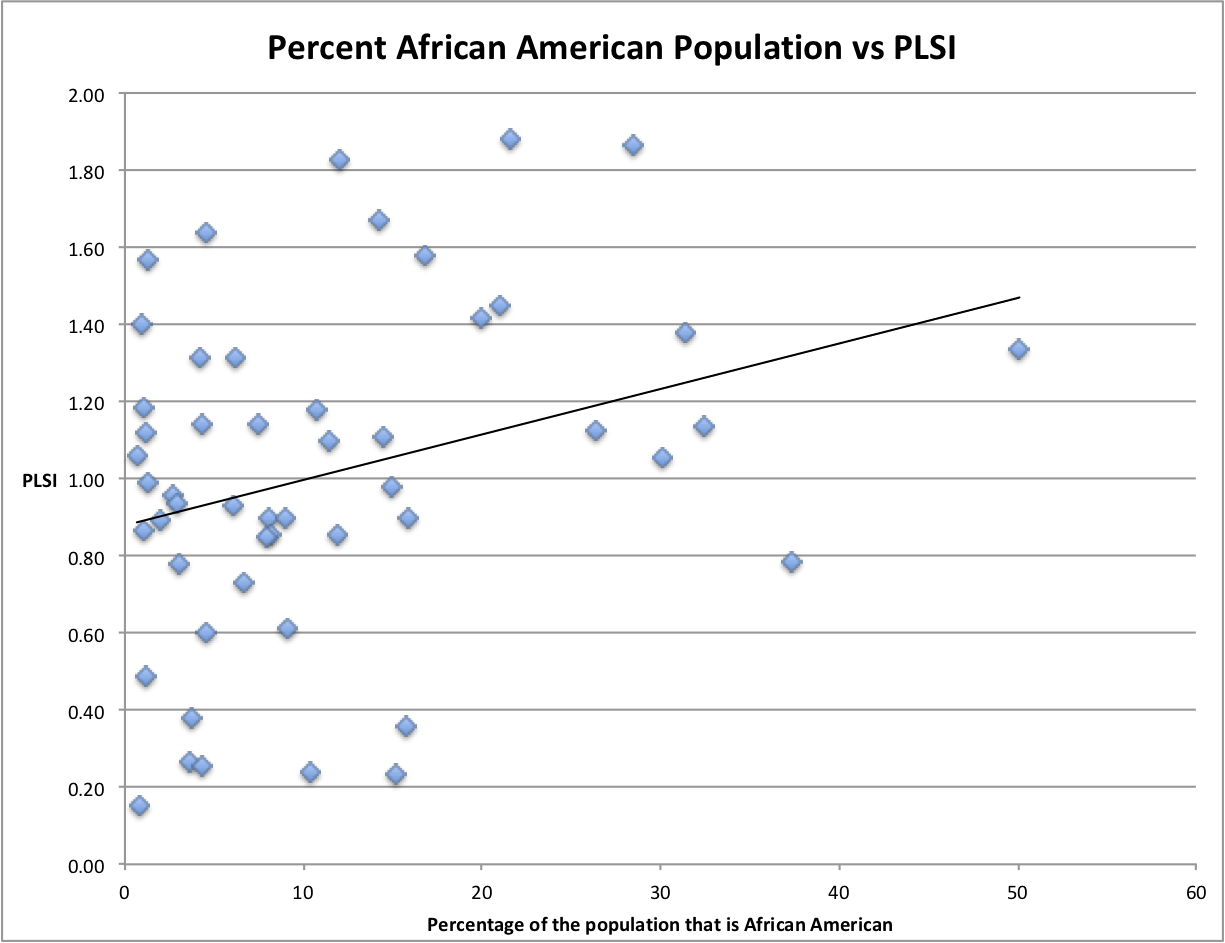 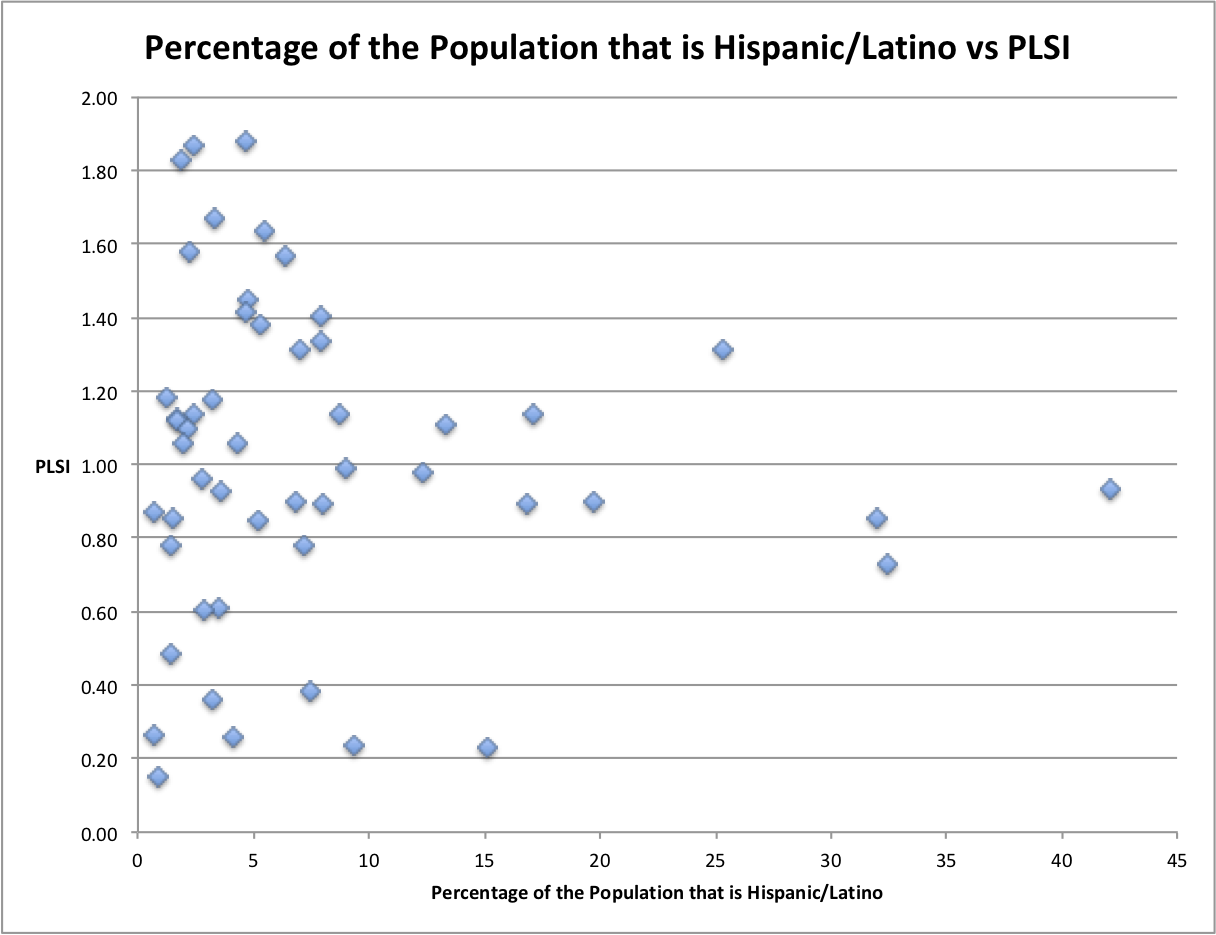 Results for this demographic are dominated by California and Texas, states that between them have almost half of all Hispanic and Latino Americans. Both of these states have below average PLSI. Thus the group PLSI for states where Hispanics and Latinos comprise 10% or more of the population is 0.81 and for states where Hispanics and Latinos comprise less than 10% of the population it is 1.16. While this would seem to indicate an inverse correlation, we cannot draw any real conclusions where the results are heavily influenced by just two states in which other factors may be at work. We also found a correlation with political leanings. States that voted for the Republican candidate in the last Presidential election had a group PLSI of 1.17. States that voted for the Democratic candidate had a PLSI of 0.78. In other words there is about 50% more payday loan spam per person directed at states that voted Republican than states that voted Democratic. The correlation coefficient was 0.29. All seven states with a PLSI greater than 1.5 voted Republican. Of the seven, payday loans are illegal in one and highly regulated in three more. 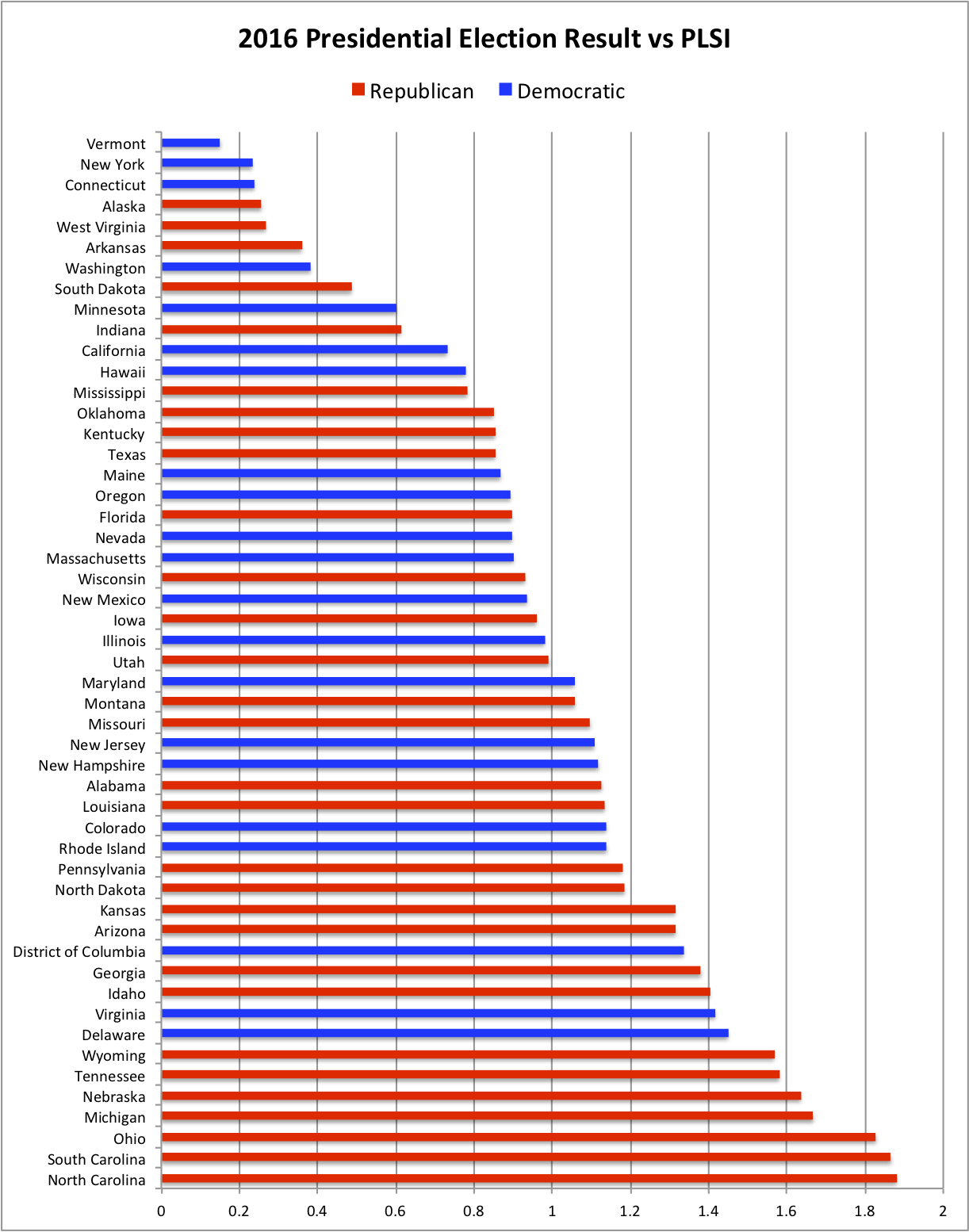 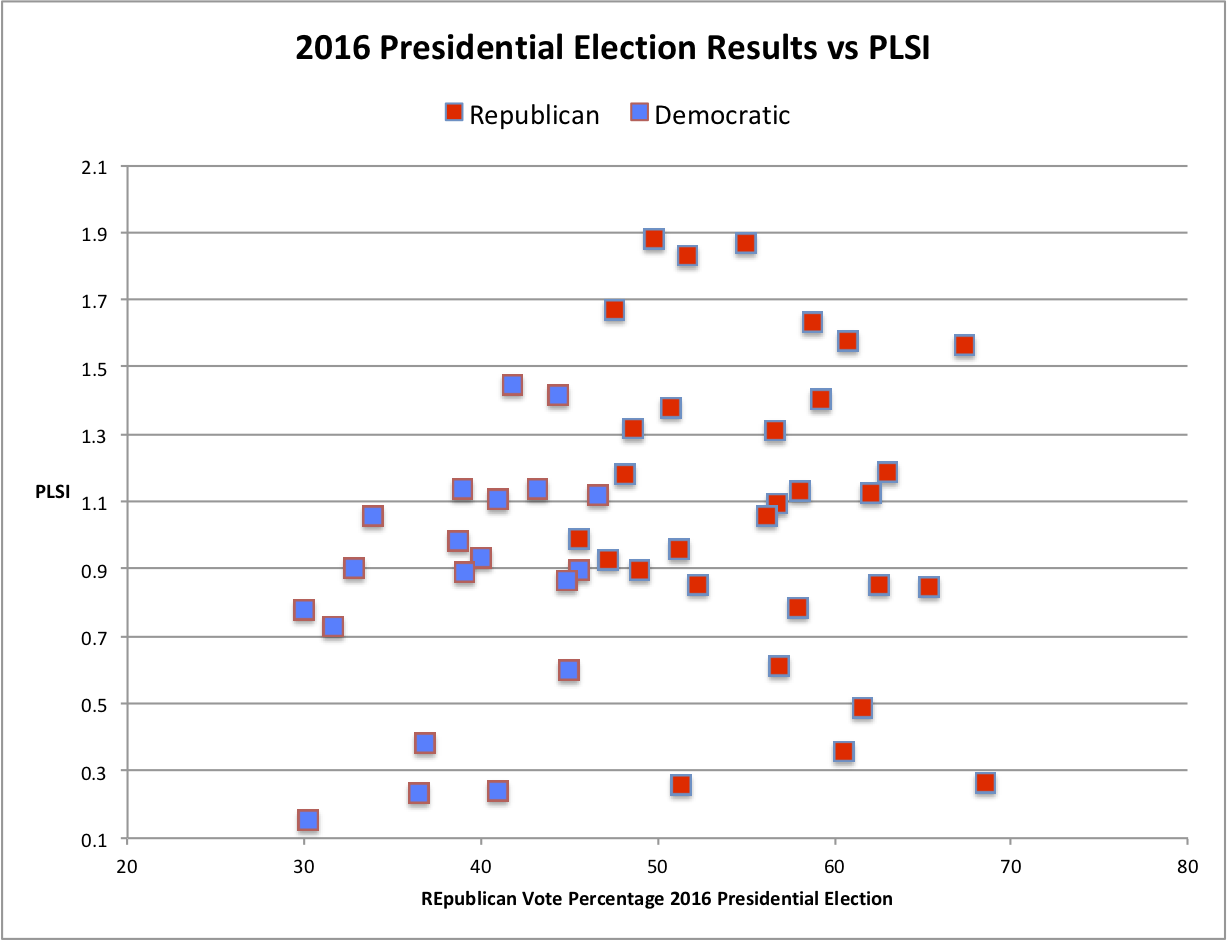 The three states with the lowest PLSI all have strict and proactive enforcement of their regulations against payday loan spam. The Vermont Attorney General’s Office has sent out Cease and Desist letters to 81 illegal payday lenders, and arrived at settlements with ten of them resulting in refunds of over a million dollars to Vermont borrowers. They have contacted a number of broadcast and Internet advertising networks to forbid payday loan advertisements in Vermont. See https://ago.vermont.gov/consumer/money-and-credit/illegal-lending/ According to the New York State Department of Financial Services:

In February 2013, the Superintendent issued a circular letter warning debt collectors that they are prohibited from collecting on illegal payday loans in New York, including usurious payday loans offered to or made in New York online... The Department has to date sent cease-and-desist letters to a total of 55 online payday loan companies, more than half of which have represented to the Department that they stopped lending to New York consumers. Others have ceased operating in the years since the Department’s letters were issued, were subject to enforcement actions by other government agencies, or changed their websites to prevent New York residents from applying for loans. https://www.dfs.ny.gov/reportpub/online_lending_survey_rpt_07112018.pdf [PDF]

The Connecticut Department of Banking has reached settlements with several payday loan companies, resulting in the recovery of over five million dollars for borrowers. See https://portal.ct.gov/DOB/Newsroom/2014/Banking-Commissioner-Announces-That-Settlement-With-Payday-Lenders-Recovers-More-Than-37-Million-Dir , https://portal.ct.gov/DOB/Newsroom/2016/Banking-Commissioner-Jorge-Prez-Announces-Nearly-14-Million-in-Relief-for-Connecticut-Consumers-in-S While a number of covariates may influence the rates of payday loan spam, our data suggest that the aggressive enforcement actions in Vermont, New York, and Connecticut, are effective in reducing the payday loan spam that their citizens receive.