Share with your network!
September 18, 2013 Andrew Conway
In March of this year the FTC issued indictments and temporary restraining orders against a number of people and companies who they alleged were sending out SMS spam offering free gift cards, iPads, iPhones, etc. After the indictments, we saw a decline in reports of this sort of spam. 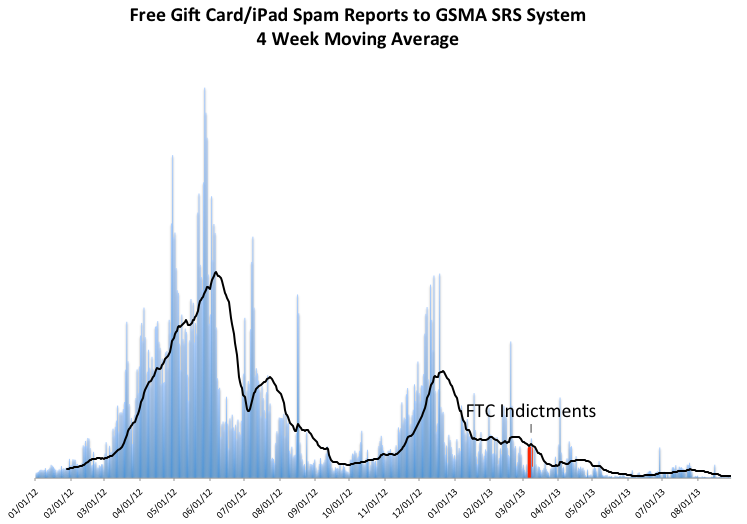 According to the allegations in the FTC indictments, this scam operated as an affiliate program, with several groups of spammers sending out the SMS messages, and one single group monetizing the traffic that was generated. This might explain why we have also seen a decline in this sort of spam in email as well - if the people monetizing the traffic have suspended their business, the other spammers have to find something else to do, even if they themselves are not subject to legal sanctions. However, it looks like the free iPad email spammers have not left the business entirely, they have just turned to other sources of income. We've recently seen email spam using the domain freeamericaipads dot com (which sure looks as if it was registered for the Free iPad scam) used in other sorts of email spam. There's a credit report promotion, a walk in bathtub promotion, a fake "Sexual Predator Alert" scam, a phoney Who's Who listing scam, and a online store promotion. The sexual predator scam is actually quite similar to the free iPad scan in operation. In order to get information on registered sex offenders in your neighborhood, you are prompted first for a zip code, then for a full name and address, while seeing increasingly threatening descriptions of the threat of local registered sex offenders... Finally, you are asked for $1 to verify your identity.

However, if you read the fine print you are actually signing up for a $30 a month subscription. So don't be fooled by fake "Sexual Predator" alerts. Oh, and nobody wants to list you in Who's Who either.